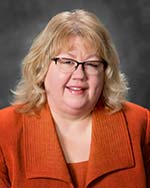 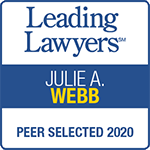 Julie A. Webb, Member in the Mt. Vernon Office of Craig & Craig, LLC, began her career at Craig & Craig in August 1996. Since that time she has practiced in the general areas of litigation with emphasis on medical negligence, personal injury defense, dram shop liability and premises liability. Ms. Webb’s fields of practice also include workers’ compensation and occupational diseases including black lung defense at both the federal and state levels. Ms. Webb is a Court Approved Mediator for the Second Judicial Circuit and has completed 40 hours of family mediation training.

Ms. Webb graduated from the Southern Illinois University at Carbondale School of Law in 1996 and was admitted to practice in Illinois that same year. Julie received a B.S. in Agricultural Communications from the University of Illinois in 1993. While in law school, Ms. Webb was the Survey Editor for the SIU Law Journal. She also served as a teaching assistant in legal writing and legal argument. Since graduating from law school, Ms. Webb has been a coach for the Law School’s annual Mediation Training.