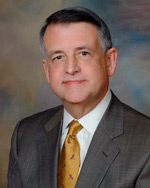 Stephen L. Corn, Senior Partner in the Mattoon Office of Craig & Craig, began his career at Craig & Craig in 1969. He has practiced continuously since that time in the general areas of litigation with emphasis on medical negligence, insurance coverage litigation and errors & omissions litigation for professionals.

Mr. Corn is a Fellow of the American College of Trial Lawyers, having been inducted in 1994.

Mr. Corn has been involved in a number of significant cases both at the trial level and at the appellate level.