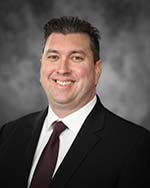 R. Sean Hocking began his career as an attorney with the Mattoon office of Craig & Craig in January 2000. He became a Partner of the Firm in 2004. Mr. Hocking focuses primarily in the areas of Products Liability, General Civil Litigation, Real Estate Law, Local Government Law, Intellectual Property and Medical Malpractice in which he has successfully represented clients for over a decade.

Mr. Hocking trained as an engineer in the field of aeronautical & astronautical engineering, earning that degree from the University of Illinois in 1996, prior to his entry into the practice of law. Mr. Hocking practices devotes a significant part of his practice to Products Liability law where he defends manufacturers of commercial and other products, including agricultural equipment and heavy machinery. Mr. Hocking is experienced with communicating technical and technological issues to lay persons and dissecting the technical opinions of opposing experts during discovery and deposition of those experts.

Mr. Hocking also devotes some of his practice to Intellectual Property law (IP). A Registered Patent Attorney since 2000, Mr. Hocking has prosecuted patent applications before the United States Patent and Trademark Office (USPTO) to secure the issuance of patents. Mr. Hocking has also represented a variety of clients on matters ranging from claims of trademark and copyright infringement, registration issues, and trade secret issues.

As an active member of the Illinois Defense Counsel (IDC), Mr. Hocking has served as Chairman and Vice-Chairman of the Events Committee from 2009-2013. The IDC Events Committee is responsible for planning and presenting the IDC’ s continuing legal education conferences, symposia and seminars, in which Mr. Hocking has previously been involved as a lecturer, having presented the Illinois Civil Procedure Update for the IDC 2007 Fall Conference. Mr. Hocking has also served on the Local Government Law Committee and has contributed publications as an author to the IDC Quarterly.

Additionally, Mr. Hocking has received an “AV Preeminent” Martindale-Hubbell Peer Review Rating. Reviewers are lawyers and judges across multiple jurisdictions and geographic locations and are listed on martindale.com. They are from similar areas of practice as the lawyer being rated, who know or have worked with the lawyer under review, and are able to rate them on their professional ethical standards and legal ability. An AV Preeminent certification mark is a significant rating accomplishment and reflective that a lawyer’s peers rank him at the highest level of professional excellence.