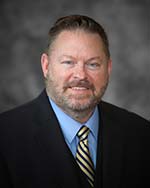 John F. Watson has been an attorney with Craig & Craig in the Mattoon office since July of 1999. He became a Partner with the Firm in 2003 and continues to practice out of the Mattoon office. Mr. Watson’s fields of practice include general civil litigation, medical malpractice defense, municipal liability defense, insurance coverage and insurance law, and intellectual property law.

Mr. Watson began his practice in criminal law as an Assistant State’s Attorney quickly being elevated to a felony prosecutor. In 1997, Mr. Watson took a position as the Special Assistant Drug Prosecutor with the State’s Attorneys’ Appellate Prosecutor’s office, conducting drug prosecutions in the Fourth District of Illinois. In January of 1999, Mr. Watson became the First Assistant State’s Attorney in Coles County. In July of 1999, Mr. Watson was hired by the firm of Craig & Craig and has focused his practice in civil litigation, medical and professional liability matters and insurance coverage litigation. Mr. Watson is a registered Patent Attorney with the United States Patent and Trademark Office and handles Intellectual Property matters.

Mr. Watson is actively involved in the Illinois Association of Defense Trial Counsel (IDC), and in June 2017 was nominated and elected to serve as one of its Board of Directors. In the past, Mr. Watson has served as the Chair of the Fall Conference Committee, and was part of a leadership group made up of the several bar associations (including the Illinois State Bar Assn., IDC, Chicago Bar Assn., Cook County Bar Assn. and the Women’s Bar Assn.) which presented a Symposium on addressing the Judicial Selection Process in Illinois focusing on the pros and cons of merit selection and the election process. He also serves as the Vice-Chair of the Amicus Committee which recommends IDC participation in Illinois Appellate Court and Illinois Supreme Court cases as a “friend of the court.”

Mr. John F. Watson has contributed to several legal bodies of work including making a presentation to the Illinois Association of Defense Trial Counsel on Illinois Tort Litigation for the Fall Conference of 2009 and authoring Chapter 10, Third-Party Practice as part of the Illinois Civil Practice: Opening the Case Volume published by the Illinois Institute of Continuing Legal Education.  Recently, Mr. Watson and one of his associates, Chase A. Rich, authored an IICLE chapter on Insurance Broker Malpractice, with a publication date of May 4, 2021.

Mr. Watson has been recognized as a Member of the Leading Lawyers Network in the fields of Insurance, Insurance Coverage & Reinsurance Law, Medical Malpractice Defense Law and Personal Injury Defense Law. Mr. Watson was recommended as a Leading Lawyer in a state wide survey. Fewer than 5% of the lawyers in Illinois receive the distinction as being a Leading Lawyer.

Additionally, Mr. Watson has received an “AV Preeminent” Martindale-Hubbell Peer Review Rating. Reviewers are lawyers and judges across multiple jurisdictions and geographic locations and are listed on martindale.com. They are from similar areas of practice as the lawyer being rated, who know or have worked with the lawyer under review, and are able to rate them on their professional ethical standards and legal ability. An AV Preeminent certification mark is a significant rating accomplishment and reflective that a lawyer’s peers rank him at the highest level of professional excellence.