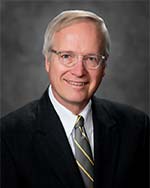 Mr. Lynch’s primary practice has been the defense of civil litigation in multiple categories of cases, including medical and legal malpractice, products liability, employment discrimination, professional liability claims against realtors and insurance agents, nursing home liability, motor vehicle accidents, premises liability and liquor liability. Mr. Lynch has tried over eighty jury cases in the State Courts of Illinois and in the United States District Court for the Southern District of Illinois. He has handled numerous appeals in the Appellate Court of Illinois, and has also argued appeals in the Illinois Supreme Court and in the United States Court of Appeals for the Seventh Circuit.

Mr. Lynch also has extensive experience in alternative dispute resolution, both as counsel for participants, and as a mediator. He has completed Basic Mediation Skills Training at the Law School of Southern Illinois University.

Mr. Lynch is rated in AV by Martindale Hubbell, and has been selected by his peers as a Leading Lawyer in Illinois. Mr. Lynch was inducted as a Fellow of the American College of Trial Lawyers at its annual meeting in Boston in October, 2009. Fellowship in the College is extended by invitation only, and only after careful investigation, to those experienced trial lawyers who have mastered the art of advocacy, and whose professional careers have been marked by the highest standards of ethical conduct, professionalism, civility and collegiality. Membership in the College cannot exceed one percent of the total lawyer population of any state or province.

Mr. Lynch has served on the Board of Directors of the Illinois Association of Defense Trial Counsel (IDC) since 2007. In 2014, he acted as co-chair of the highly successful IDC 50th Anniversary Gala celebration in Chicago.

Mr. Lynch recently completed work as co-author of the 2015 edition of Chapter 2 of the volume on Federal Civil Practice in Illinois, entitled, “Jurisdiction of Courts Other Than District Courts,” published by the Illinois Institute of Continuing Legal Education. He has written and lectured for Lorman Education on the subject of Confidentiality of Medical Records in Illinois.