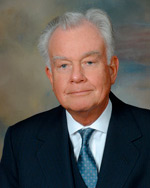 Mr. Ewart was born April 18, 1936. He is a native of Greenup, Illinois, and lived in that community until he entered college at the University of Illinois in 1954. He graduated from the University of Illinois College of Law with a J. D. Degree in 1960. Upon graduation, he immediately entered the Army to fulfill a six month tour of active duty which had been deferred until his graduation from law school. (After his discharge from active duty, he served in the Army Reserve for approximately six years, and upon his discharge from the Reserve, he held the Rank of Captain.) Upon his discharge from active duty, he immediately joined Craig & Craig in 1961 as an Associate. He became at Partner at Craig & Craig in 1964. He retired from the Partnership and active practice as an attorney on January 1, 2004, and took the position as of Counsel with Craig & Craig at that time.

During his Professional Career, he specialized in Civil Trials and Appellate Court activities in many areas of the law including Insurance Law; Labor and Employment Law; and Oil and Gas Transportation. Also, during his Career, he was a Member of many legal organizations and served on committees and as an officer including the following: Coles-Cumberland Bar Association (President, 1979-1980), Illinois State Bar Association, (Member of Civil Practice and Procedure Committee) American Bar Association, Fellows of American Bar Foundation, Illinois Association of Defense Trial Counsel (Member of Board of Directors, 1971 – 1979; President 1978-1979), Illinois Appellate Lawyers Association (Member of Board of Directors, (1980 – 1983), Chicago Bar Association, the National Association of Railroad Trial counsel and a Fellow of the American College of Trial Lawyers (Member of State Membership Nominating Committee for two five year terms; and Member of the Alternative Dispute Resolutions Committee.)

His activities have also included serving as a speaker at many legal seminars and authoring many Articles for legal publications.