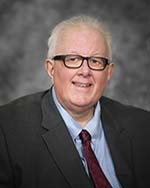 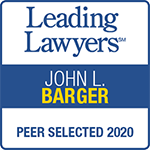 John L. Barger joined Craig & Craig in 1984. He is a graduate of Charleston High School, Eastern Illinois University and the University of Arkansas School of Law in Fayetteville. He grew up on a farm in southern Coles County, Illinois.

He has been selected by his peers as a Leading Lawyer in Illinois.

He is Board member and former President of the Neal Foundation. The Neal Foundation is a charitable organization supporting the Coles and Cumberland County areas. He is President of Janesville Cemetery, an Illinois Not-For-Profit Corporation. Janesville Cemetery is located in southern Coles County, Illinois. He also volunteers time to the Cumberland County Pet Connection. The Pet Connection is an organization that rescues dogs from the Cumberland County pound on or before their death day and finds homes for them. He has also donated many hours of time as a volunteer coach for both boys baseball and girls softball in Mattoon, Toledo and Greenup, Illinois.

He has had an article written about him in Leading Lawyers magazine. Click here to read this article.