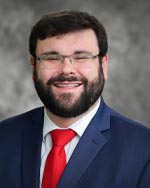 While in law school, Mr. Rich was a member of the Advanced Appellate Moot Court team. This team engaged in competitions arguing new and emerging questions of law all over the country. Mr. Rich also represented his class as an elected representative to the Student Bar Association for all three years of his law school career.

During the summers of 2018 and 2019, Mr. Rich was a law clerk for the Thomas More Society, a national public interest law firm that specializes in defending religious freedom at no cost to its clients. Mr. Rich was also a member of the Newman Catholic Student Center in Carbondale and assisted in the creation of and participated in student programs regarding faith formation.

Mr. Rich was born and raised in Mattoon, and graduated from Mattoon High School in 2014. When he was in high school, Mr. Rich was a proud member of the Green Wave football team and was in the marching band. Mr. Rich currently lives in Mattoon and is a parishioner at Immaculate Conception Catholic Church and is on the parish council there.